Gillian Weir: Missionary for the Organ in Concert 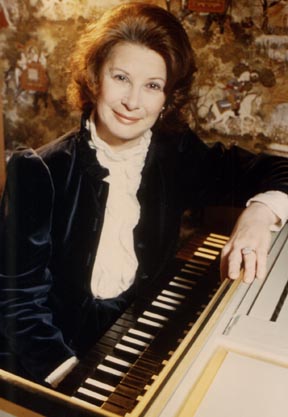 ENGLISH ORGANIST GILLIAN WEIR is one of the few instrumentalists in her field who earns her living solely from appearing in concert. While there are many busy and outstanding organ virtuosi playing recitals all over the world, most hold a “position” somewhere, in a church, or on a college faculty, or both.

In many respects Weir is the quintessential concert organist. Her interests, her capabilities, her personality, her rapid adjustment to changing situations, cities, climates and organs make her a natural for the international concert circuit. I, for one, could never keep up her schedule of travel and performance. Merely listening to her outline a typical week left me exhausted.

Like many others, I first discovered Gillian Weir via recordings and taped recitals. It was not until last spring, when she appeared in Lincoln Center's Alice Tully Hall, did I hear her play in person. And, after her triumphant recital on the superb Kuhn pipe organ, where she was presented as the New York AGO Chapter's International Performer of the Year award winner, when I met her, I found the woman behind the music every bit as exciting and fascinating as she was at the keyboard.

Although she prefers to spend two days, for about a total of eight hours, rehearsing on the organ she will play in concert, New York did not provide the requisite hours, partly because the soloist arrived at the last moment and the Tully schedule precluded no more than half the the desired time.

Where had Miss Weir been prior to Lincoln Center, and where was she headed? The mind boggles at the poise with which she recounted that she was in Naples for a big romantic program the Wednesday before, then flew to Norway to play Schönberg's Variations and other works for the Bergen Festival, then via Copenhagen to New York City. After our post-recital brunch, on Thursday, she took off for England to offer a Saturday masterclass followed by a Tuesday recording session of Vierne for the BBC and a Wednesday recital at York University.

Well, it takes more than just planes to make possible such a schedule. It takes a performer of rare skill and stamina. That Gillian Weir has both in abundance, anyone hearing her at any of the three AGO regional convention concerts she presented this summer could hardly doubt.

In addition to her tremendous virtuosity and artistry, one reason Miss Weir has won my heart so completely is her supreme dedication to the pipe organ as a major concert instrument. Of course, we need the organ as the base for religious services of every sort and denomination but there is a welcome and growing movement to get organists and pipe organs back into the concert hall. After years of defeat in such halls as Carnegie Hall and Avery Fisher Hall in New York, and Orchestra Hall in Chicago, the latter is finally dedicating a new Möller instrument in December.

If auditorium managers and symphonic conductors could spend an hour with Gillian Weir talking and playing, pipe organs would be sprouting like corn in Kansas. She is so completely compelling as a spokesman for concert organs and concert repertoire, that no honest person could oppose her views.

Glamour is one of the keys to Weir's ever-rising reception as a concert performer. An off-the-shoulder gown must have been a bit of a shock to some as she came on to play her Alice Tully Hall recital last May, but she makes her point vividly. Not only is she a strikingly handsome woman, but she wants her audiences to know instantly that this is not some somber undertaking, but the sharing of great music.

As one other major factor of her programming, Miss Weir plans carefully, both for the instrument at her disposal and the audience to hear her. With an almost endless repertoire constantly at the ready, there are few limitations as to what she may decide to offer.

Although she has made a serious study of the tracker organ mechanism, and tends to favor it, Miss Weir deplores rigid thinking that limits ideas to one thing or another. She is fascinated with various instruments and their means of making music, but she disapproves entirely of organists who tend to think solely in terms of their instrument, and neglect what should be their goal, making great music.

Dressing, speaking and playing with great flair, the organist was outspoken against turning playing into what she called “a circus act.” “The integrity of the music must always come first,” she noted, “but to get a new public, we must discover and perform the very best and most exciting music with integrity and imagination.”

As one frequently “staggered” by the ignorance of many performing musicians, Miss Weir is a born teacher. Alas, her nature and her schedule keep her from private teaching, but her masterclasses should be required for every aspiring and even established performers. I have a personal conviction that if Gillian Weir could teach more, an entire new generation of exciting, sensitive and well prepared musicians would flood the world and there would be no possibility of the organ standing in a dark corner of neglect on the part of other musicians, management and critics.

Although she refused “categorically” to discuss any aspect of her private life, it seems only fair to note that her husband is the American organ designer Lawrence Phelps, involved with the building of the Alice Tully Hall Kuhn organ. I was unaware of this when I reviewed her concert, but my words in my local Newhouse newspapers seem appropriate here:

Gillian Weir's recital on the superb Theodore Kuhn pipe organ was far and away the most musical and entertaining organ recital since the hall was opened. The quality of selections was high, the performances both musical and technically magnificent, and the totality even greater than the sum of the parts. Miss Weir's recital was an ideal introduction to those who doubt the organ's validity as a concert instrument, but the large audience was, alas and as usual, largely composed of the performers peers and colleagues.

More and more performers today strive to program and plan schedules so that the public at large can be intrigued into discovering just how special the world of organ music really is. Gillian Weir is one of many, but she is very special, and the entire profession benefits from her integrity, dedication, zestful enthusiasm and musicianship. May her tribe increase!