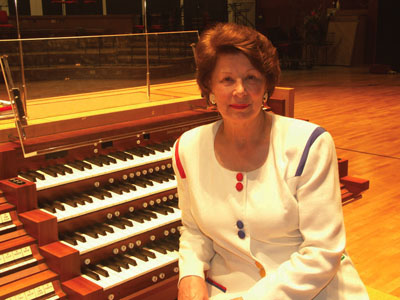 Britain's Dame Gillian Weir is one of the world's foremost musical artists. Her unique career as an internationally acclaimed concert organist, performing worldwide at the great festivals and with leading orchestras and conductors, has established her as a distinguished musician. She is known for her virtuosity, integrity and outstanding musicianship, which combined with a notable personal charisma, have placed her in the forefront of her profession and won her the admiration of audiences and critics alike.

Born in New Zealand and brought up in Wanganui, Gillian Weir was a co-winner of the Auckland Star Piano Competition at 19, playing Mozart. A year later she won a scholarship of the Associated Board of the Royal Schools of Music in London. There she studied with the concert pianist Cyril Smith and the renowned organist Ralph Downes, and in her second year (1964) won the prestigious St. Albans International Organ Competition.

Her performance on this occasion of a work by Messiaen at a time when his music was little-known outside France, stunned the audience and jury alike, and she became particularly associated with this composer; she has several time performed the complete works in series, and her recording for Collins Classics has been hailed as 'one of the major recording triumphs of the century'.

Gillian Weir made her début at the Royal Albert Hall while still a student, as soloist in the Poulenc Organ Concerto, on the opening night of the 1965 season of the Promenade Concerts, and in the same year at the Royal Festival Hall in recital, then the youngest organist to have played there. Since then she has engaged in a dazzling career as an internationally acclaimed concert organist, taking up residence in England and the USA along the way.

Her fame as a performer, which has stimulated numerous young players to follow her, is backed by her scholarly reputation; she is in constant demand as an adjudicator for the leading international competitions and as lecturer, broadcaster, teacher and writer, while her television appearances have reached large new audiences. Her repertoire is exceptional for its breadth and variety, stretching from the Renaissance to contemporary works; she has performed the complete organ works of Bach and others, as well as of Olivier Messiaen, and her pre-eminent position as Messiaen interpreter has been further underlined by her CD release of his complete organ works to great acclaim as well as by her contribution to Faber's The Messiaen Companion and other publications. Her series of six weekly recitals in Westminster Cathedral of Messiaen's organ works in 1998, the 90th anniversary of his birth, brought huge audiences and for her performances she was awarded The Evening Standard Award for Outstanding Solo Performance, the first organist to have been so honoured. She has received a host of awards and honors worldwide, the most notable of which was presented in 1996 when she was made a Dame Commander of the British Empire, the only organist to receive this accolade. She had previously been awarded a CBE (Commander of the British Empire) in the Queen's Birthday Honors in 1989. Gillian Weir's six-part television series for the BBC in 1989 drew weekly audiences of two million in Britain, exceptional for an arts program, and has been repeated in many countries throughout the world.

Dame Gillian Weir's exceptional artistry was marked in 1999 by the re-issue on CD of her series of Argo recordings, and her nomination by Classic CD magazine as one of the 100 Greatest Players of the Century and by the Sunday Times as one of the 1000 Music Makers of the Millennium. In December 2000 ITV's South Bank Show chronicled her worldwide activities as performer, teacher and recording artist in a highly acclaimed documentary. She has also served as President of the Incorporated Society of Musicians, the Royal College of Organists (the first woman president) and the Incorporated Society of Organists (also the first woman president), and is also the Prince Consort Professor of Organ, Royal College of Music, London.

The past decade has afforded the public the opportunity to savour more of her performances via compact disc recordings. She has performed the ever-popular Poulenc organ concerto 65 times, and followed her earlier recording with the London Sinfonia under Richard Hickox (on the organ of the Royal Festival Hall, for Virgin Classics) with an SACD with the English Chamber Orchestra under David Hill on the Marcussen organ at Tonbridge School (Linn). Her Organ Master series for Priory spotlights three of the magnificent organs designed by her late husband Lawrence Phelps, and her legendary Messiaen recordings from Aarhus were re-released on Priory, including the first recording of the three pieces published posthumously and issued in enhanced audio quality and with exhaustively researched programme notes on the music, his organ and facets of his compositional technique. The release was acclaimed by the famous writer Alex Ross when he wrote “when I reviewed a great pile of Messiaen organ discs for Fanfare magazine, I came to the conclusion that Weir's cycle, originally issued on Collins Classics and now available from Priory Records, reigned supreme”, echoing remarks by Gramophone which said the recording “reclaims its definitive status”. (For more on Messiaen, see the Messiaen section on this website.)

In 2012 Gillian Weir made the decision to bring her non-stop concertising career to an end after 48 years and some 2000 appearances throughout the world. She gave a final recital in December at London's great Westminster Cathedral, where she had first played in 1964 while still a student. The capacity audience included most of the organ world, with music-lovers from far and wide; press reactions to the emotional but joyous event can be seen on the home page. However Gillian will not be leaving the music world; known as a masterly teacher she continues with her much sought-after master-classes, and looks forward to many more years of engaging in a wide range of musical activities.