Dame Gillian Weir - From Where I Sit 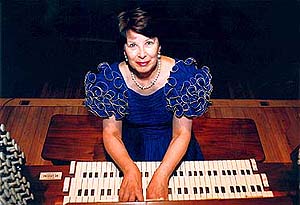 It never occurred to me, as a small child growing up in New Zealand, that I would be doing what I'm doing now. I just wanted to be involved with music and think I would have been happy even to become an orchestral librarian. To me, music is another country that I can almost see: it's where I like to live. The maddening thing for me today is that the arts are seen as elitist, not just in New Zealand where sports rules, but in so many other places. I want to carry a banner through the streets saying "I'm an Elitist! Please call me one!" We should all try to be elite in some way, and move forward to become more civilised and cultivate the mind.

I'm so weary of hearing people apologise for the organ and saying that audiences find its music inaccessible and dull. Lots of people find chamber music boring... They're wrong, of course, but does anyone make apologies for chamber music? No. I don't expect everybody to like the organ or me; I just do the best I can and encourage people to enjoy the experience of listening to music on the organ. I hate the dumbing-down approach to the instrument - just as I hate it with anything else - which wants to make it "popular" by playing complete rubbish.

If only we could treat music as an essential part of everybody's education, then children would accept it from day one and there would be no need to try to drag people to it later by using gimmicks. Every young player talks about increasing the size of the organ audience, and there are those who would invite an audience to clap along to a trio sonata if they could get away with it. You'd never find a pianist doing that, since it's such a foolish way of attracting audiences. Yes, marketing is important. But I disagree with methods that talk down to people and patronise them.

Organists have often been their own worst enemies. Until the early 1800s the organ was one of the most complicated pieces of machinery in existence. That's one of its problems today, since it attracts a lot of people who have much in common with old car enthusiasts. Instead of hearing that it's a Riley with an overhead camshaft, you hear that it's a Walker with two 32-foots!

Registering is part of the art of being able to highlight a good instrument's personality. But beyond that the phrasing, structure and meaning of the music are what count.

There are problems with the organ, and one is the instrument itself. If the music is played on an unsuitable instrument, it can mean nothing at all. Although Bach's organ music can even survive being played on a synthesiser, it sounds best when its strength, which is counterpoint, is heard clearly. An organ that is polyphonic in texture is to Bach's advantage, but we haven't had too many of those until recently. In America lots of good organs are situated in appalling acoustical conditions, which means that audiences are simply not able to hear the music and instrument at all. People are trying to apply all sorts of computer-type controls to the organ which, paradoxically, are locking players in and inhibiting the organist. We've got to keep the music in sight.

I love the structure in music. There is so much talk about the stops a particular composer had on his organ, which is often irrelevant. What really matters is having knowledge of the music itself. For my new Priory recording on the organ of the First Church of Christ, Scientist, in Boston, I had the great pleasure of playing three magnificent sonatas as well as Willan's Introduction, Passacaglia and Fugue, which is a genuine masterpiece. The structure of Reubke's Sonata on the 94th Psalm, for example, is fascinating, as is the process of containing the whole arc of the piece in your head and being able to relate one of its sections to the others in an almost occult way. That is so much more satisfying than just ploughing through and adding stops along the way, as if you were demonstrating the organ. It's loathsome when people say they think I've "demonstrated" the organ, which makes me feel a bit like a new model at a motor show. It is possible, I believe, to articulate the structure of the Reubke in a way that holds people.

The Willan was a favourite work of my late husband, Lawrence Phelps, who designed the organ in Boston and, towards the end of his life, returned to supervise an enormous reconstruction. The Priory disc is the first of a series of three I wanted to make as a tribute to my husband. It's incredible how that instrument can embrace the very different demands of Jongen's Sonata Eroica, the Willan and Reubke works, and also the Hindemith Organ Sonata. I'm thrilled by the marvelous sense of unity now that the instrument has been refurbished, revoiced and rescaled; yet it allows me the flexibility to make it into a completely different organ from one piece to the next.

People have expressed surprise that I haven't made more recordings. I always felt it was difficult to reach a point where one really knows what one wanted to say about a particular piece. After living with them for many years, I now feel I can take more risks. I don't like this type of controlled playing in which every note is sent out like a pea from a peashooter: where's the daring and where's the difference in that? Finally, I realised that I would play every piece differently in every recital so there would never be from me what I would consider a "definitive" performance. Now when I record, I find it's a case of just playing and keeping the sense of what happens quite naturally in a performance.

Interview by Andrew Stewart. This article appeared in the January 2001 Issue of Gramophone magazine.