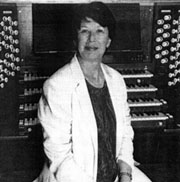 Ideally, the organist GILLIAN WEIR would like to travel with an exorcist

MUSICIANS travel all over the world, but most of us never have the time to see where we are. I'd been on six working visits to Los Angeles before I said to myself, “This is really ridiculous. I come here so often, but I haven't even spent one day in Disneyland.” On my seventh visit, I made sure that there was space in my schedule to enjoy the Magic Kingdom.

Someone told me that certain artists always try to stay in a hotel belonging to a particular chain that they've become used to. It's a very sensible idea. So many of us frequently wake up not entirely sure which city we're in. If you're jet-lagged, or just exhausted from the journey, it's actually very reassuring, in the middle of the night, to know the layout of the hotel bedroom and exactly where the bathroom is.

We used to have an apartment in Boston. The New England fall is magnificent: the leaf colours are so beautiful, you just have to see it for yourself. It's extremely difficult to do it justice in words. We often used to take short breaks in Vermont and Maine. There are so many delightful inns, which are full of character and — thank goodness — have modern plumbing. I'm a hopeless philistine and don't like roughing it. I like nice hotels and would feel extremely miserable without lots of hot water at the end of the day.

I've often thought that my ideal travelling companions would be a hairdresser and an exorcist. A hairdresser because it's almost impossible for me to stick to a regular hair appointment in England as I'm never here long enough, although at least I can usually find a salon in most of the hotels I visit. And an exorcist because I sometimes have to go into churches to practise at some ungodly hour, and often lock up afterwards with an ancient key; it can feel quite spooky. It's well known that some of them, St Albans for example, are supposed to be haunted. I heard vague whispering noises when I was rehearsing Messiaen there late one night. Whenever I stopped playing, the whispering started up again. At 4am, when I left, I thanked the organist for letting me practise and told him that I could have done without the ghost. He knew exactly what I meant.

I grew up on the North Island of New Zealand, which has miles of beautiful, white, sandy beaches and is also famous for its extraordinary thermal regions. When I was a child, we had great fun watching the bubbling mud and bathing in hot pools. We once set off as a family for a two-week camping holiday. My two older brothers were deeply disappointed when it lasted exactly one night because I couldn't cope with being bitten by mosquitoes. Even then, I think I was destined for holidays that meant I would be drinking a glass of white wine in a lovely air-conditioned space, looking out at the sea or countryside.

I've always loved being beside water. I'd adore to live by the water now, but Reading is much more convenient for Heathrow where I seem to spend so much of my life.

One country where I make a point of combining holidays with work is Denmark. The Hotel Hesselet, in Nyborg, is famous because it overlooks a bridge and a huge expanse of sea. Gazing out at the water is incredibly soothing. Torsten Nilsson, a Swedish composer and church musician, wrote a long symphonic organ piece. Whenever I play it, the music feels like a musical picture of a day in the life of the sea. There's something very liberating about being able to just gaze at the sea. It reminds me of my childhood. Driving in foreign countries has never bothered me, so I often take my car to Denmark and tag on an extra couple of days after a recital. I hate crowds, and in my experience, Denmark is never crowded.

The places I go to are peaceful and welcoming. People are very friendly. We all tend to think of Denmark as Copenhagen and the Tivoli Gardens, but I recommend that everyone should take the opportunity to visit Jutland. One of my favourite places is Fyn, the middle island. It's a totally different landscape, where the light is incredibly beautiful. For years, the light has attracted a community of artists to the island.

Cities are still a source of excitement for me. I particularly enjoy Vienna, which is the ideal place for a musical break. Whenever I go to Mozart's house, near the cathedral, I can absolutely visualise him running up the stairs, with his wife nearby. Of course Brahms and Schubert also have close associations with Vienna, so there's always a wonderful atmosphere. You don't have to go to grand concert halls for music, because there's usually something interesting being performed in some of the churches.

When I went to South Africa, I could hardly believe how beautiful it was. I stayed with friends in a hotel on a huge mountain near Durban for a few nights. Watching the sun go down at night, and the way the colours changed, was breathtaking. We went to a beautiful game park, where I was completely fascinated by the animals. It seemed to me that the giraffes, with their wonderful eyelashes, were looking at us as if to say: “I wonder if they're all right!” If someone could guarantee me 21st-century plumbing, I wouldn't hesitate at the chance to go on safari.

I've just spent a couple of weeks in Australia. Perth is a beautiful place in summer or winter, a perfectly magical city. Sophisticated when you need it but offering all the peace and tranquillity you want. I love escaping to the river and looking at the black swans. I particularly enjoyed going to Rottnest Island for a couple of nights. It's where the convicts used to be taken. France is another of my special places. I've always been fascinated by French history and, of course, by the wonderful organ music. I especially love Carcassonne and Toulouse. I recently discovered the Château de Chambourd in the Loire, which was originally built as a hunting lodge. When I went there it was almost deserted, but that didn't matter. I was thrilled to see the magnificent double staircase, and tried to imagine what it was like when people arrived there with their horses.

For me, the best holidays last no more than 10 days. Longer than that and I tend to start tapping my fingers on the washbasin. Strange as it may sound, sometimes what I want more than anything from a holiday is simply to be curled up at home like a real couch potato, watching all the episodes of Frasier that one of my friends has recorded for me. Now that really would be bliss!