Click on the image itself to see an enlarged version. 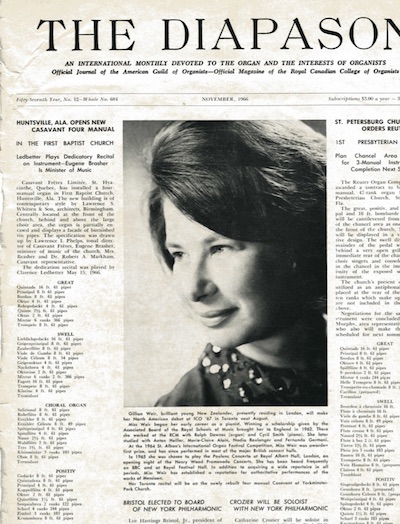 An undiscovered treasure! Recorded in 1966 but never released are nearly 100 minutes of Messiaen recorded by Gillian Weir shortly after she won the St. Alban's Competition. At the centrepiece of this recital is Les Corps Glorieux and the other pieces display Dame Gillian's immense command over and total empathy with this music. The 7000+-word notes include an introduction to the recording; detailed notes on the works; and a fascinating article on her association and work with Olivier Messiaen - all by Dame Gillian. Also included is a technical note on the history of the recording (made in the early hours of the morning on 10 and 11 October 1966, to ensure that any sound of trains was minimised!) and its remastering, by Campbell Hughes, engineer for the original project and remastering engineer for this issue.

Scherzo is a delightful disc with a collection of fun music for the organ, showing its lighter and playful side. Performed with Gillian Weir's customary wit and virtuosity, it was recorded on the Aeolian-Skinner Organ of Uihlein Hall, Milwaukee, Wisconsin. It is currently available from retailers such as amazon. Click here for track listings.

Final Year of Public Recitals
January 2012
The final public recital will be held on December 5th at Westminster Cathedral in London. This recital will mark the climax of Gillian Weir's final year of public performances. During 2012 she will play in many of her favourite and prestigious venues in Europe and Great Britain, culminating in this performance in the great cathedral where in November 1964 she gave one of the first of her nearly 2000 concerts given around the world during her celebrated career. After 2012 she will continue with master-classes, adjudicating and some recording.
King of Instruments DVD Now Available!

The legendary six-part television programme The King of Instruments is available on DVD! Gillian Weir takes you on a tour across Europe featuring six different organs, providing engaging dialogue about the history of the times, music and instruments. See and hear over 20 works by a wide range of composers performed on these beautiful instruments, as filmed and recorded by the BBC team in the late 1980s. Order your own copy and experience why the BBC said “it performed remarkably well, achieving a 2 million audience and a very high audience appreciation index (AI) “second only to the wedding of Charles and Diana”.

John Amis: A Personal Appreciation
July 2010
The May-July 2010 issue of The Organ magazine features an article Dame Gillian Weir: A personal appreciation by John Amis. The article retraces Gillian Weir's career over the years and notes her extraordinary impact on the world of the organ. Click here to go to the article.
Summer Concerts Prove Popular
August 2005

A busy concert schedule has had Gillian traveling to many places. She recently performed at the AGO regional convention in Grand Rapids, Michigan: “Some 600 people filled Mayflower Congregational Church to standing-room-only to hear Weir... by the end of the program, all were standing. In a 75-minute program, Weir played a series of virtuoso works by Max Reger, Marcel Dupre and less familiar composers that would, in most other situations, leave another player gasping for breath as if he had just run on a marathon. After polishing off Marcel Lanquetuit's Toccata in D major, a showpiece for hands that was majestic for all its activity, Weir still appeared as relaxed as if she had just finished an evening stroll. Weir played with all the vigor and virtuosity of a Franz Liszt” (from The Grand Rapids Press).

Back by Popular Demand: King of Instruments Series!
May 2005

This set of historic organ performances recorded between 1974 and 1980 is now available as part of the Eloquence series of the Decca label; the discs are now sold as individual CDs. With “authority and stylish aplomb,” Gillian Weir performs a wide variety of music on instruments new and old.

Like finding a pristine photograph of a treasured great-great-grandparent, the Mulholland Grand Organ in the Ulster Hall in Belfast provides an exceptionally clear and intact view of the Victorian Town Hall Organ. On one of the best-preserved organs of that era, Gillian Weir performs music from a wide variety of composers and time periods, showing the remarkable flexibility of this instrument.

Gillian Weir has accepted the appointment of Distinguished Visiting Artist at the Peabody Conservatory of Music at Johns Hopkins University for the 2005-2006 Academic Year. She will give classes to the Organ Department which is led by the internationally known organist and teacher Donald Sutherland.

From the February 2005 issue of The Organ: “No matter how many organ recordings I listen to, those of Gillian Weir simply mesmerise me, no less so than in her reissued series of recordings of Messiaen. It is though she is in contant communication with that extraordinary composer.”

The June 2005 issue of Gramophone remarks that “mention should also be made of Weir's excellent insert-notes where scholarship and the communicative skills of a great musician are together in perfect harmony,” and from the April 2005 BBC Music Magazine, commenting on one of that issues choice CDs: “Gillian Weir's Bach series, consummation of a world-class musician's recorded legacy, continues with this release recorded in Leipzig, where her characteristic clarity, wit and elegance are partnered by the excellent and much-heralded ‘Bach’ organ at St Thomas's.”

From the October 2004 The American Organist: “There is only one Dame Gillian Weir. She is without peer in her ability to do everything right...”, and from the June 2004 issue of Gramophone: “Her playing during these two and a half hours of organic bliss really is beyond all praise.”

Gillian Weir performed the opening recital on the new Aubertin organ in the King's College Chapel at Aberdeen University in Scotland. This organ by Aubertin of France was the first installation in the U.K. The University graciously bestowed an Honorary D.Mus at that time for her contributions in music.